In the last century, civil aviation has reached a whole new level. Huge aircrafts with a large carrying capacity and passenger capacity rose into the sky. Every year the number of passengers transported by civil aircraft is growing exponentially. It is quite possible that in a couple of decades almost all inhabitants of the Earth will use airplanes. And there are prerequisites for this, since a huge number of countries have already signed contracts with Airbus S. A. S for the production of the Airbus A380 model. In fact, the A380 is the largest passenger aircraft in the world as of 2015.

As of January 2015, about 150 copies of this serial airliner were produced. The double-decker jet is costing the buyer $ 404 million. The development of the Airbus A380 began in the last century, but the first copy of the four-engine jet airliner took off from the airfield in 2005. At the same time, Airbus S. A. S spent about 12 billion euros and 10 years of work on the development of the 380th.

The largest aircraft in terms of passenger capacity is also the largest production airliner in the world. With a height of 24.08 meters, the wingspan is 79.75 meters. The three-cabin aircraft 72.75 meters long can accommodate 525 passengers. However, a modification of a single-class type with a record capacity of 853 passengers is envisaged.

"Air Bus" is equipped with different types of engines, and only two of the four engines are equipped with thrust reversers. The takeoff weight of the airliner is 560 tons. As for the mass of the aircraft itself, it is equal to 280 tons. In addition, a special modification of the A380F with a carrying capacity of 150 tons is provided for cargo transportation. The Airbus A380 is capable of flying up to 15.4 thousand kilometers without landing. 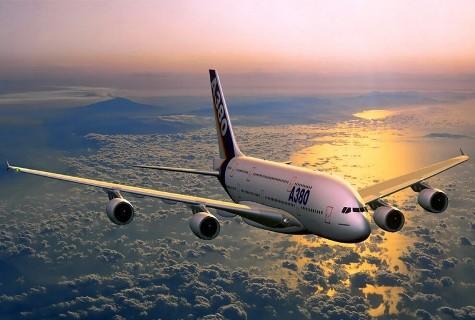 The world's largest passenger aircraft is assembled at various factories. For example, some A380 sections are manufactured in the UK, Spain, France and Germany. A large number of large and small companies are involved in the production of aircraft parts. The number of customers for the airliner, the photo of which is presented below, is increasing every day. Developers at Airbus S. A. S need to sell about 420 models to recoup the development costs of the aircraft. 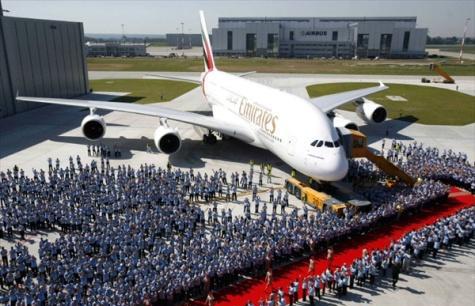 Among the customers there are many countries from Asia (Qatar, UAE, Saudi Arabia) and Europe (Great Britain, Germany, France). Moreover, from the Russian air carriers, only Transaero ordered 4 copies of the A380. Most of the "Air buses" released from the assembly line fly in the skies over the United Arab Emirates (55 aircraft), which, in fact, are the main customers of this model (140 models were ordered). 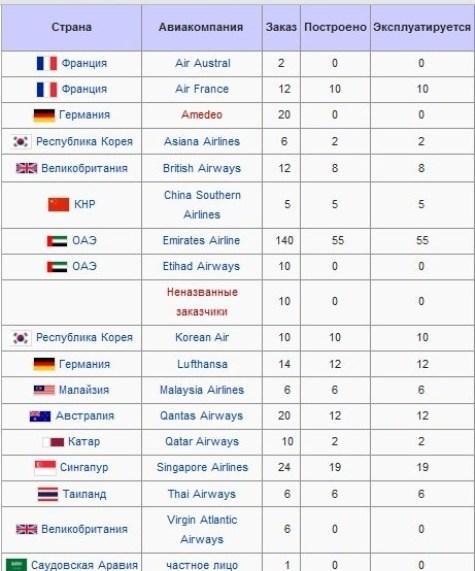 Prior to the appearance of the Airbus A380 in the skies, the Boeing 747 was considered the largest passenger aircraft in the world. Boeing's passenger capacity record lasted 36 years. Nobody knows how long the A380 model will be in the top of the most passenger-seating aircraft, but it is already clear that due to the increased passenger traffic, a new “steel giant” will appear very soon.

Details about the Airbus A380 and its construction are described in the following documentary:

The largest bulldozer in the world.

The largest ship in the world.

The largest whale in the world.

The largest phone in the world.

The largest catfish in the world.

The largest city in the world by area.

The largest water park in the world.

The largest bear in the world.

Difference between square and rectangle.

The difference between a creative person and others.

How to lay paving stones?

Difference between diploma and coursework.

How to choose a battery for a car.