A place of business can take many forms. For example, be a holding or a corporation. What are these types of enterprises?

Holding is a group of commercial firms legally related to each other. In its structure, as a rule, there is a parent company that owns several subsidiaries. At the disposal of the main organization - controlling stakes in their shares. Subsidiaries within the holding can also form their own subordinate structures. In this case, they will be mother to them.

Control of the main organization of the holding over subsidiaries is often exercised not only in the form of ownership of a controlling stake in their shares, but also in other ways. For example, the competence of the heads of the parent company may be the appointment of the top management of subordinate structures. In some cases, top managers of the holding are able to directly participate in the management of subsidiaries.

Key management decisions are also made at the level of the top management structures of the group of companies. The holding's top managers work out a business development strategy that subsidiaries must adhere to.

For the parent company and its subordinate structures, the owners of the holding determine uniform standards of interaction on various issues. General standards of ethics, business culture, and joint decision-making are established for the employees of all organizations within the group of companies.

The term " corporation" is very capacious. One of its meanings is the unification of commercial organizations in order to jointly solve business problems. Another meaning of the term "corporation" is any commercial firm in principle. Both interpretations are widespread in Russia. 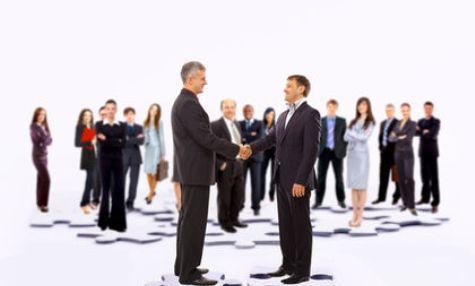 But it is worth noting that the corporation as a form of combining companies at the official level in the Russian Federation is not too developed. Therefore, in practice, the term in question is most often used in Russia in a different context.

Note that officially state corporations can be established in the Russian Federation. But by law, they are not allowed to be commercial firms. Therefore, their activities are very far from traditional corporations in the field of business. Although it can be associated with making a profit.

Thus, in the Russian business environment, the term "corporation" is used in most cases unofficially. As a rule, for the purpose of designating a large business with an impressive capitalization. Most often - public joint-stock companies that can attract investment capital by issuing shares and organizing their sale on the stock exchange.

If we talk about corporations as associations of firms, then they, like a holding, are characterized by legal dependence. However, the subordination of some firms to others is not so pronounced in them. Each of the companies that make up the corporation, as a rule, builds its own business strategy. But quite regularly, there can be a joint discussion of fundamental issues related to business development, coordination of actions in the field of capital management and market development.

Incorporation in a corporation of a parent company that owns controlling stakes in subsidiaries, as in a holding company, is a rare phenomenon. As a rule, securities in corporations are in free circulation. Although, of course, members of the respective associations can make deals with each other for the redistribution of stakes in shares, which can lead to the concentration of their controlling stakes in the hands of a narrow group of entrepreneurs.

Another feature of corporations is that they are formed, as a rule, by organizations that are represented in different market segments. It happens that they are completely different. For example, in one corporation there may be food and heavy industry enterprises.

The main difference between a holding and a corporation (if the second term is considered as a combination of firms) is that the first is much more centralized. As we noted above, the controlling stake in the holding companies is most often owned by the parent company. For classical corporations, such a business management organization is not typical. Centralization in such structures can be expressed only in the establishment of some general governing bodies, such as, for example, the board of directors.

Having found out what is the difference between a holding and a corporation, we will display the criteria we have identified in the table.

Difference between shaping and aerobics

What to eat after exercise?

Difference between MicroSD, MicroSDHC and MicroSDXC.

The difference between oil filters.

The difference between a raw egg and a boiled one.

Difference between fitness and aerobics

How to give a gift?

How to spell it correctly: jeans or jeans?.